This is a repost from OVHcloud’s official blogpost., please read it there to support my company. Thanks Horacio Gonzalez for the awesome drawings!

This post has been published on both the StreamNative and OVHcloud blogs and was co-authored by Sijie Guo, Jia Zhai and Pierre Zemb. Thanks Horacio Gonzalez for the illustrations! 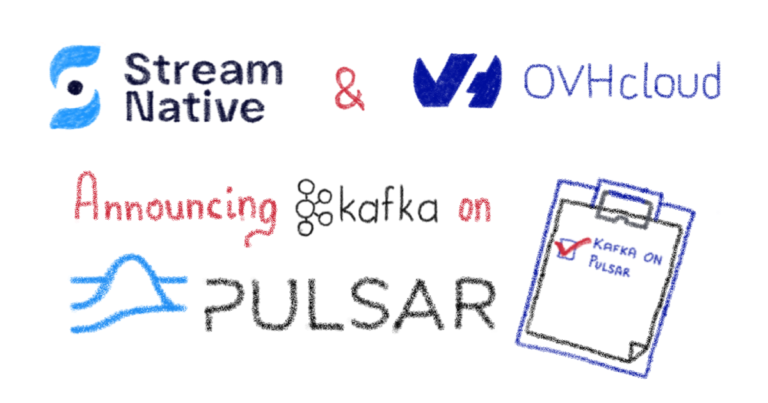 We are excited to announce that StreamNative and OVHcloud are open-sourcing “Kafka on Pulsar” (KoP). KoP brings the native Apache Kafka protocol support to Apache Pulsar by introducing a Kafka protocol handler on Pulsar brokers. By adding the KoP protocol handler to your existing Pulsar cluster, you can now migrate your existing Kafka applications and services to Pulsar without modifying the code. This enables Kafka applications to leverage Pulsar’s powerful features, such as:

What is Apache Pulsar?

Apache Pulsar is an event streaming platform designed from the ground up to be cloud-native- deploying a multi-layer and segment-centric architecture. The architecture separates serving and storage into different layers, making the system container-friendly. The cloud-native architecture provides scalability, availability and resiliency and enables companies to expand their offerings with real-time data-enabled solutions. Pulsar has gained wide adoption since it was open-sourced in 2016 and was designated an Apache Top-Level project in 2018.

The need behind KoP

Pulsar provides a unified messaging model for both queueing and streaming workloads. Pulsar implemented its own protobuf-based binary protocol to provide high performance and low latency. This choice of protobuf makes it convenient to implement Pulsar clients and the project already supports Java, Go, Python and C++ languages alongside thirdparty clients provided by the community. However, existing applications written using other messaging protocols had to be rewritten to adopt Pulsar’s new unified messaging protocol.

To address this, the Pulsar community developed applications to facilitate the migration to Pulsar from other messaging systems. For example, Pulsar provides a [Kafka wrapper](http://(https://pulsar.apache.org/docs/en/adaptors-kafka) on Kafka Java API, which allows existing applications that already use Kafka Java client switching from Kafka to Pulsar without code change. Pulsar also has a rich connector ecosystem, connecting Pulsar with other data systems. Yet, there was still a strong demand from those looking to switch from other Kafka applications to Pulsar.

Internally, OVHcloud had been running Apache Kafka for years, but despite their experience operating multiple clusters with millions of messages per second on Kafka, there were painful operational challenges. For example, putting thousands of topics from thousands of users into a single cluster was difficult without multi-tenancy.

As a result, OVHcloud decided to shift and build the foundation of their topic-as-a-service product, called ioStream, on Pulsar instead of Kafka. Pulsar’s multi-tenancy and the overall architecture with Apache Bookkeeper simplified operations compared to Kafka. 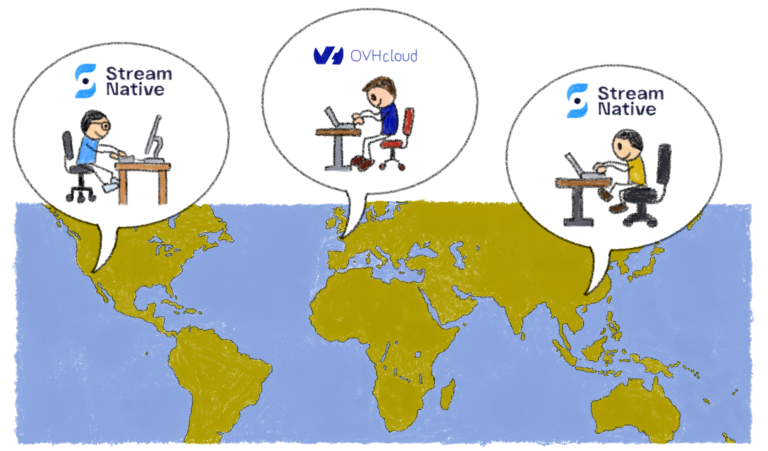 KoP was developed to provide a streamlined and comprehensive solution leveraging Pulsar and BookKeeper’s event stream storage infrastructure and Pulsar’s pluggable protocol handler framework. KoP is implemented as a protocol handler plugin with protocol name “kafka”. It can be installed and configured to run as part of Pulsar brokers.

Both Pulsar and Kafka share a very similar data model around log for both pub/sub messaging and event streaming. For example, both are built on top of a distributed log. A key difference between these two systems is how they implement the distributed log. Kafka implements the distributed log in a partition-basis architecture, where a distributed log (a partition in Kafka) is designated to store in a set of brokers, while Pulsar deploys a segment-based architecture to implement its distributed log by leveraging Apache BookKeeper as its scale-out segment storage layer. Pulsar’s segment based architecture provides benefits such as rebalance-free, instant scalability, and infinite event stream storage. You can learn more about the key differences between Pulsar and Kafka in this Splunk blog and in this blog from the Bookkeeper project.

The implementation is done by comparing the protocols between Pulsar and Kafka. We found that there are a lot of similarities between these two protocols. Both protocols are comprised of the following operations:

As you can see, these are all the primitive operations provided by a scale-out distributed log storage such as Apache BookKeeper. The core capabilities of Pulsar are implemented on top of Apache BookKeeper. Thus it is pretty easy and straightforward to implement the Kafka concepts by using the existing components that Pulsar has developed on BookKeeper.
The following figure illustrates how we add the Kafka protocol support within Pulsar. We are introducing a new Protocol Handlerwhich implements the Kafka wire protocol by leveraging the existing components (such as topic discovery, the distributed log library – ManagedLedger, cursors and etc) that Pulsar already has. 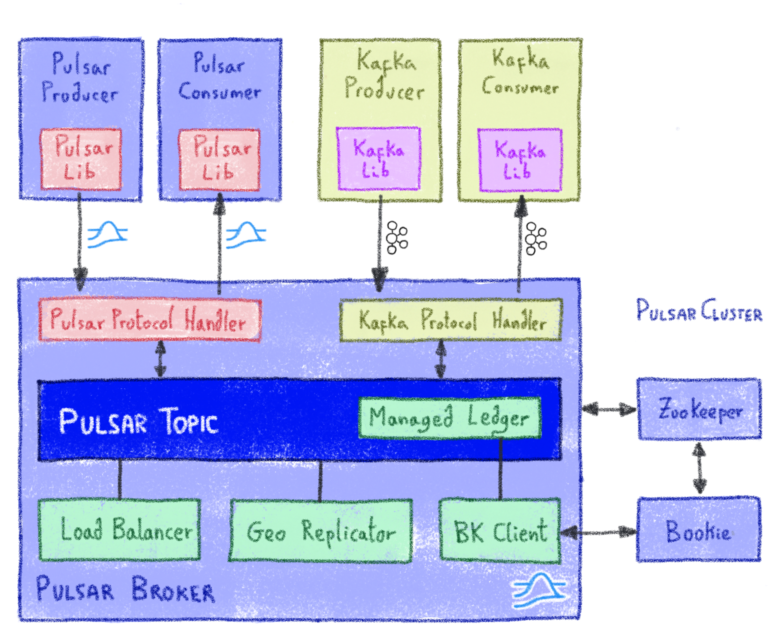 In Kafka, all the topics are stored in one flat namespace. But in Pulsar, topics are organized in hierarchical multi-tenant namespaces. We introduce a setting kafkaNamespace in broker configuration to allow the administrator configuring to map Kafka topics to Pulsar topics.

In order to let Kafka users leverage the multi-tenancy feature of Apache Pulsar, a Kafka user can specify a Pulsar tenant and namespace as its SASL username when it uses SASL authentication mechanism to authenticate a Kafka client.

The most challenging part is to implement the group coordinator and offsets management. Because Pulsar doesn’t have a centralized group coordinator for assigning partitions to consumers of a consumer group and managing offsets for each consumer group. In Pulsar, the partition assignment is managed by broker on a per-partition basis, and the offset management is done by storing the acknowledgements in cursors by the owner broker of that partition.

It is difficult to align the Pulsar model with the Kafka model. Hence, for the sake of providing full compatibility with Kafka clients, we implemented the Kafka group coordinator by storing the coordinator group changes and offsets in a system topic called _public/kafka/_offsets in Pulsar.

This allows us to bridge the gap between Pulsar and Kafka and allows people to use existing Pulsar tools and policies to manage subscriptions and monitor Kafka consumers. We add a background thread in the implemented group coordinator to periodically sync offset updates from the system topic to Pulsar cursors. Hence a Kafka consumer group is effectively treated as a Pulsar subscription. All the existing Pulsar toolings can be used for managing Kafka consumer groups as well.

At both companies, we value customer success. We believe that providing a native Kafka protocol on Apache Pulsar will reduce the barriers for people adopting Pulsar to achieve their business success. By integrating two popular event streaming ecosystems, KoP unlocks new use cases. Customers can leverage advantages from each ecosystem and build a truly unified event streaming platform with Apache Pulsar to accelerate the development of real-time applications and services.

With KoP, a log collector can continue collecting log data from its sources and producing messages to Apache Pulsar using existing Kafka integrations. The downstream applications can use Pulsar Functions to process the events arriving in the system to do serverless event streaming.

KoP is open sourced under Apache License V2 in https://github.com/streamnative/kop.

We are looking forward to your issues, and PRs. You can also join #kop channel in Pulsar Slack to discuss all things about Kafka-on-Pulsar.

StreamNative and OVHcloud are also hosting a webinar about KoP on March 31. If you are interested in learning more details about KoP,please sign up. Looking forward to meeting you online. 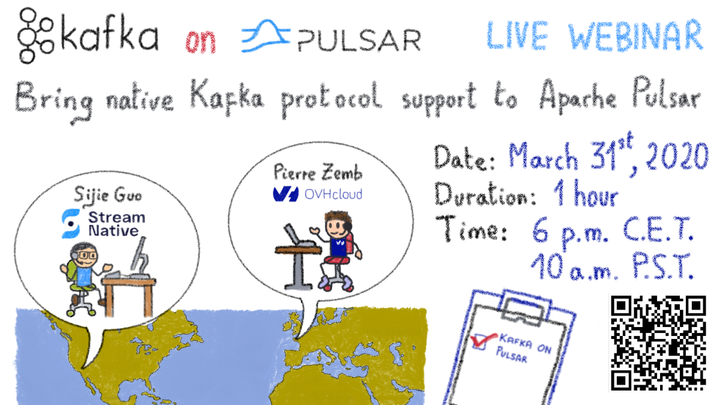 The KoP project was originally initiated by StreamNative. The OVHcloud team joined the project to collaborate on the development of the KoP project. Many thanks to Pierre Zemb and Steven Le Roux from OVHcloud for their contributions to this project!