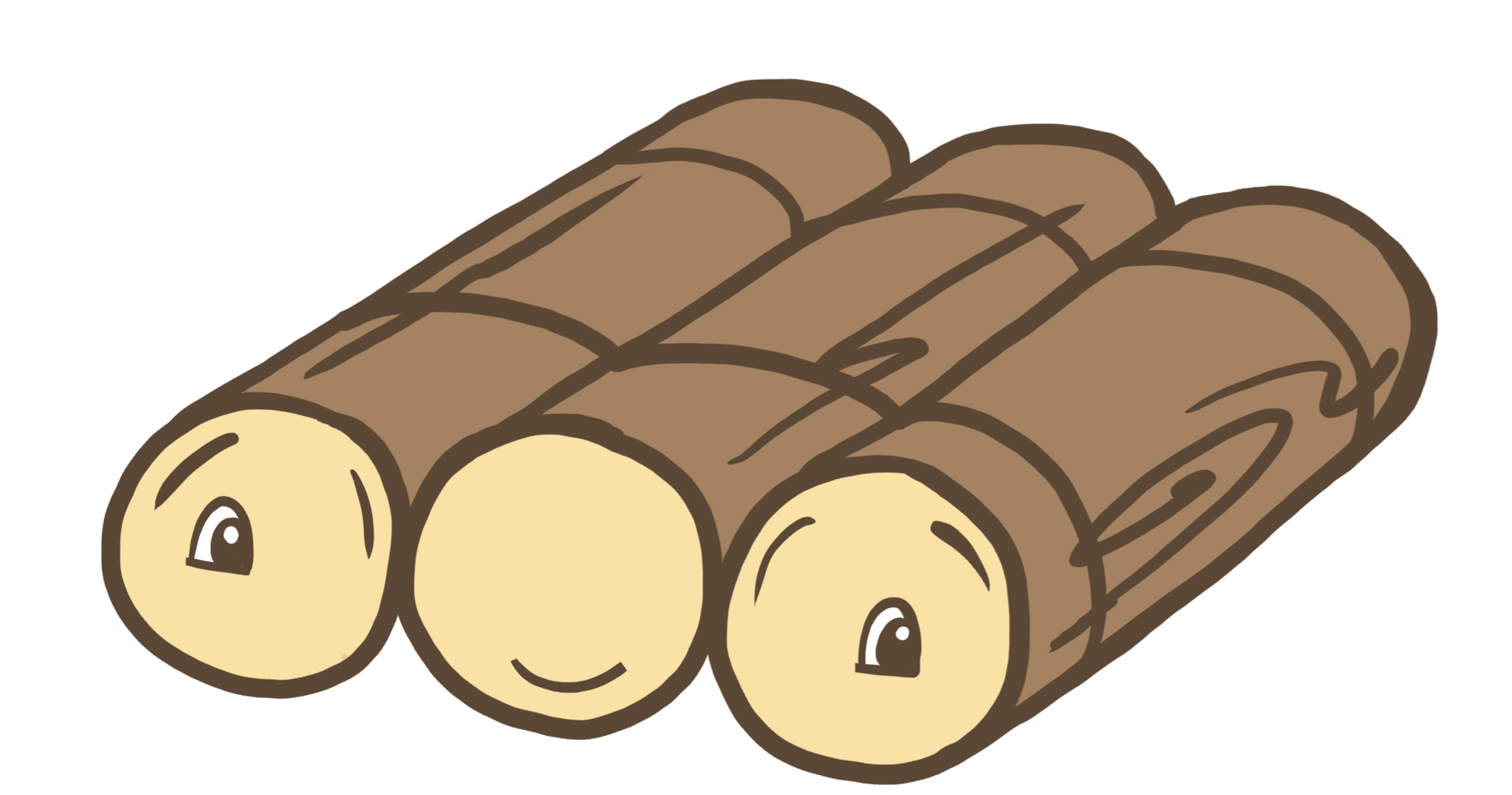 Notes About is a blogpost serie you will find a lot of links, videos, quotes, podcasts to click on about a specific topic. Today we will discover Raft’s paper called ‘In Search of an Understandable Consensus Algorithm’.

As I’m digging into ETCD, I needed to refresh my memory about Raft. I started by reading the paper located here and I’m also playing with the amazing Raft labs made by PingCAP.

These labs are derived from the lab2:raft and lab3:kvraft from the famous MIT 6.824 course but rewritten in Rust.

Raft is a consensus algorithm for managing a replicated log. It produces a result equivalent to (multi-)Paxos, andit is as efficient as Paxos, but its structure is differentfrom Paxos; this makes Raft more understandable thanPaxos and also provides a better foundation for build-ing practical systems.

Raft separates the key elements of consensus, such asleader election, log replication, and safety, and it enforcesa stronger degree of coherency to reduce the number ofstates that must be considered.

Consensus algorithms allow a collection of machines to work as a coherent group that can survive the failures of some of its members.

Paxos has dominated the discussion of consensus algorithms over the last decade.

Unfortunately, Paxos is quite difficult to understand, inspite of numerous attempts to make it more approachable.Furthermore, its architecture requires complex changes to support practical systems. As a result, both systembuilders and students struggle with Paxos.

Our approach was unusual in that our primary goal was understandability.

We believe that Raft is superior to Paxos and other consensus algorithms, both for educational purposes and as a foundation for implementation.

The main idea is to compute identical copies of the same state (i.e x:3, y:9) in case of machines’s failure. Most of the time, an ordered wal (write-ahead log) is used in the implementation, to hold the mutation (x:4). Keeping the replicated log consistent is the job of the consensus algorithm, here Raft.

Raft creates a true split between: 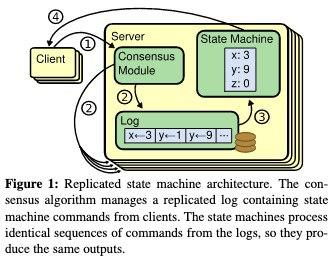 The paper is listing the drawbacks of Paxos:

It is simpler and more efficient to design a system around a log, where new entries are appended sequentially in a constrained order.

As a result, practical systems bear little resemblance to Paxos. Each implementation begins with Paxos, discovers the difficulties in implementing it, and then develops a significantly different architecture. This is time-consuming and error-prone, and the difficulties of understanding Paxos exacerbate the problem. The following com-ment from the Chubby implementers is typical:

There are significant gaps between the description of the Paxos algorithm and the needs of a real-world system the final system will be based on an un-proven protocol [4].

Beside all the others goals of Raft:

understandability was the most difficult challenge:

we divided problems into separate pieces that could be solved, explained, and understood relatively independently. For example, in Raft we separated leader election, log replication, safety, and membership changes.

Our second approach was to simplify the state spaceby reducing the number of states to consider, making thesystem more coherent and eliminating nondeterminism where possible.

Raft is heavily relying on the leader pattern:

Raft implements consensus by first electing a distinguished leader, then giving the leader complete responsibility for managing the replicated log.

The leader accepts log entries from clients, replicates them on other servers, and tells servers when it is safe to apply log entries to their state machines.

Thanks to this pattern, Raft is splitting the consensus problem into 3:

Each server can be in one of the three states:

Leader is elected through election: Each term (interval of time of arbitrary length packed with an number) begins with an election, in which one or more candidates attempt to become leader. If a candidate wins the election, then it serves as leader for the rest of the term. In the case of a split vote, the term will end with no leader; a new term (with a new election) will begin.

Each server stores a current term number, which increases monotonically over time. Current terms are exchanged whenever servers communicate; if one server’s current term is smaller than the other’s, then it updates its current term to the larger value. If a candidate or leader discovers that its term is out of date, it immediately reverts to fol-lower state. If a server receives a request with a stale term number, it rejects the request.

RPC is used for communications:

A good vizualization is available here.

The key-point of the election are the fact that:

To begin an election, a follower increments its current term and transitions to candidate state. It then votes for itself and issues RequestVote RPCs in parallel to each of the other servers in the cluster. A candidate continues in this state until one of three things happens:

A good vizualization is available here.

Once a leader has been elected, it begins servicing client requests. Each client request contains a command to be executed by the replicated state machines. The leader appends the command to its log as a new entry, then issues AppendEntries RPCs in parallel to each of the other servers to replicate the entry. When the entry has been safely replicated (as described below), the leader applies the entry to its state machine and returns the result of that execution to the client.

The leader decides when it is safe to apply a log entry to the state machines; such an entry is called committed. Raft guarantees that committed entries are durable and will eventually be executed by all of the available state machines.

Raft is implementing a lot of safety inside the log:

This is really interesting to be leader-failure proof. And for follower’s failure:

In Raft, the leader handles inconsistencies by forcing the followers’ logs to duplicate its own.

As Raft guarantees that all the committed entries are available on all followers, log entries only flow in one di-rection, from leaders to followers, and leaders never over-write existing entries in their logs.

Raft uses the voting process to prevent a candidate from winning an election unless its log contains all committed entries. A candidate must contact a majority of the cluster in order to be elected, which means that every committed entry must be present in at least one of those servers.

This behavior avoids future leaders to attempt to finish replicating an entry where the leader crashes before committing an entry.

If a follower or candidate crashes, then future RequestVote and AppendEntries RPCs sent to it will fail. Raft handles these failures by retrying indefinitely.

This section presents how to do cluster configuration(the set of servers participating in the consensus algorithm). Raft implements a two-phase approach:

As the WAL holds the commands, we need to compact it. Raft is using snapshots as describe here: 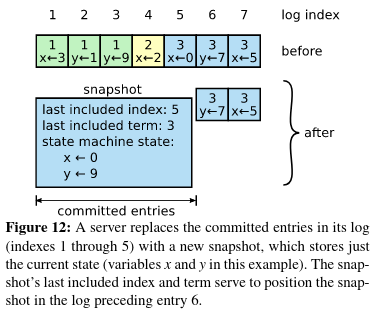 the leader must occasionally send snapshots to followers that lag behind.

This is useful for slow follower or a new server joining the cluster.

The leader uses a new RPC called InstallSnapshot to send snapshots to followers that are too far behind.

Clients of Raft send all of their requests to the leader. When a client first starts up, it connects to a randomly-chosen server. If the client’s first choice is not the leader,that server will reject the client’s request and supply information about the most recent leader it has heard from.